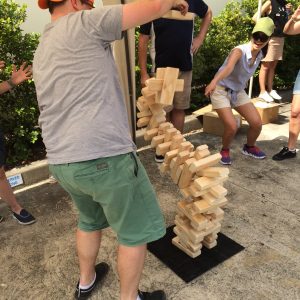 Yep, it’s that time of year folks… Offices small and large are having their annual Christmas party.

Just the words “Christmas Party” can stir up feelings of dread, excitement, and honestly, a little bit of fear. Oh, and embarrassment, let’s not forget what happened last year… Organisers run through all the possible scenarios in the pursuit of the perfect day. What if there’s not enough food? What if Sam from sales gets drunk again? Is the Santa costume too much? And Secret Santa. Don’t even get me started on the stress of Secret Santa.

This year at Delta Force HQ we did something a little different. We enjoyed a delicious lunch (there was definitely enough food). And then we entered the car park (not the most glamorous of venues, we’ll admit), feeling curious and excited. It’s a tradition at HQ that the day is a complete surprise, so it was a mystery. We were ready for the challenge, whatever it was.

There on the ground sat a boxed bike, a helmet, a toolkit and a bag of what can only be described as Duplo on steroids. It was simple, beat or be beaten. we had to work as a team to achieve victory. We were split into our teams (signified by some beautiful coloured caps),
and experienced a team building marathon like no other. 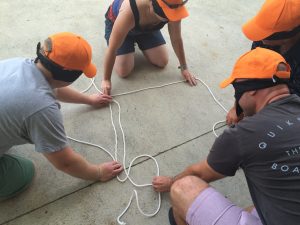 We all learnt a few things that day.

1. Justin can rap like no other, and has dance moves that rival Michael Jackson.
2. Terry is a master of Jenga with cat-like reflexes that we’d never seen before.
3. Sharon likes to win (we already knew that, but we think it’s worth mentioning).

As the day drew to a close, we started our final challenge- building the bikes.

Team vs. team, we struggled to build the bikes as quickly as possible.
There was some stealing of tools,but a little bit of sabotage never hurt anyone.

Our bikes were certified as safe to ride.

And then it was over.

The sweaty, satisfied  Delta Force HQ crew were in for a surprise.

The bikes we had just built were not for our own childlike amusement. Rather, these special bikes would be given to children in need. Children in our own backyard. These children were from homes affected by alcohol and drug abuse. They have endured experiences that many of us will never know. Family friends, aunties and more often than not their aging grandparents were charged with raising them. A special group called the Mirabel Foundation works with these children, to support and guide them as they grow up. They work tirelessly to provide these children with a normal, happy childhood, and that’s what the bikes were for.

Because every child deserves a bike. 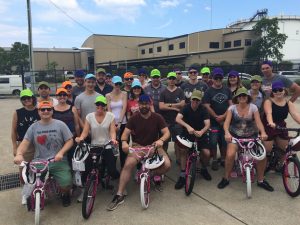 We watched the kids come one by one to pick up their bikes, our awesome staff helping them to ride around our car park. They were shy at first, but after a helping hand and a smile they were grinning and racing around in no time.

It’s not often you get to experience that kind of innocent joy.

This Christmas is going to be a little more special for us here at Delta Force HQ. It’s not often you really step back to think about how lucky you truly are. We can take for granted our loving family and friends. Many of these children can’t. But hopefully a few of these children will have a brighter Christmas this year, and that’s enough to keep us smiling.

We can’t wait for our Christmas party next year, though I’m not quite sure how it will possibly beat this year’s.

Have a Merry Christmas, from the Delta Force Paintball Crew.